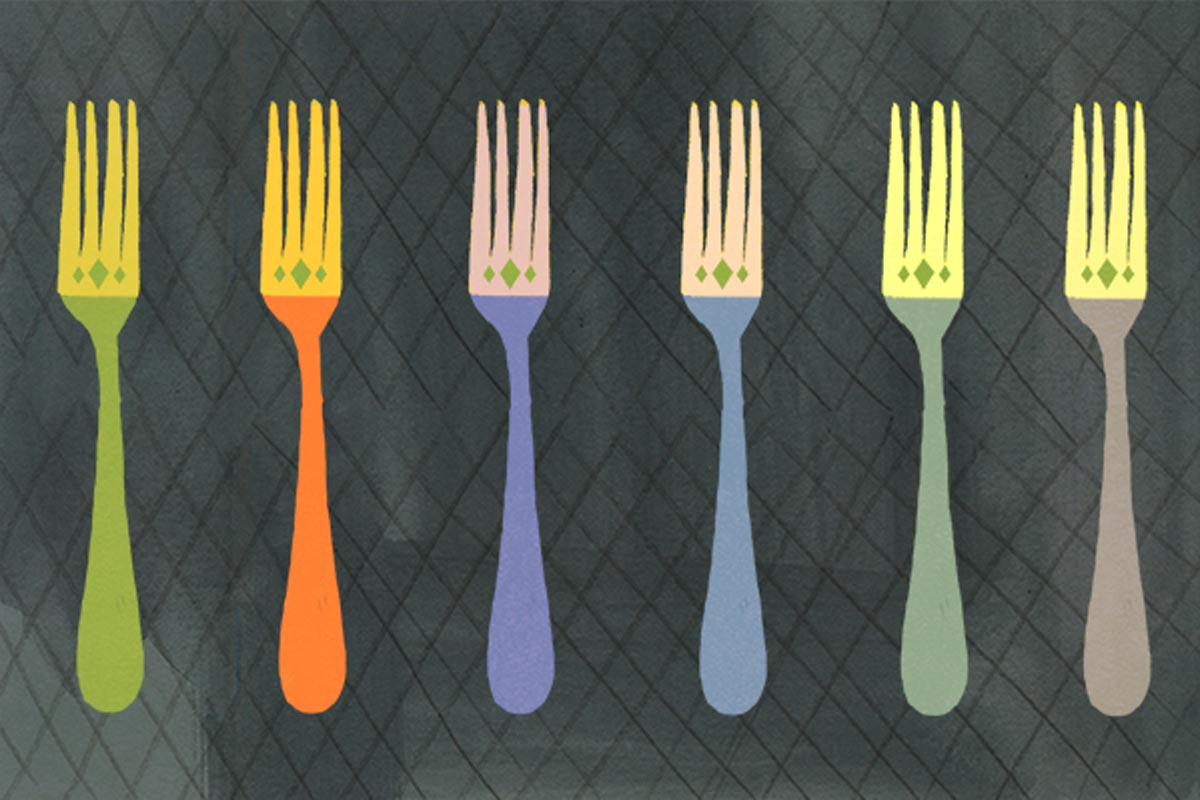 Have you ever visited the still lives gallery at the Royal Palace of Caserta? The section dedicated to food paintings is so appetising you will want to grab a fork. As a matter of fact, the history of this essential piece of cutlery has more to share with this lavish royal residency in the South of Italy than you may think.

Until the end of the XVIII century, when invited for dinner, you could not expect your dining companions to use this now obvious eating accessory . Even at aristocratic tables, it was accepted to use one’s hands, the main manner prescription being to keep plenty of napkins at hand and rinse your hands with a damp cloth after every meal.
Forks were mostly used to cook and serve meat, but they looked quite different, featuring only two to three prongs. This latter “devilish” feature made them questionable in the eyes of religious zealots, and this probably slowed the adoption of the fork as a common utility throughout Europe.

Besides, having only a couple of teeth made forks quite unhandy to catch pasta from your plate. This might have been a minor issue at most historical tables, but not at the royal court in the Kingdom of Naples of the 1700s, especially not under king Ferdinando IV of Bourbon.

The Bourbons in Naples and birth of the modern fork.

The Bourbons of Spain ruled Naples and Southern Italy for most part of the XVIII century.

Carlos III took the throne of Naples in 1734, followed by his son Ferdinando, born and raised in Naples.

The Bourbon reign was a golden age for the gastronomy of Southern Italy, seeing the birth of many innovations, both in the fields and the kitchen, and the establishment of recipes that eventually came down to this day – almost unchanged and equally appreciated.

Ferdinando was famous since a young age for his love of getaways among the street children of Naples and for speaking mainly in the Neapolitan dialect.
A notorious glutton, he was particularly fond of pasta, which at the time was mainly a popular food, quite unroyally eaten by hands.
It’s probably due to him if maccheroni and spaghetti made it to more aristocratic tables, the main obstacle to this being that spaghetti weren’t the most convenient food to eat with your hands in the presence of notables and foreign ministers.
Ferdinando wouldn’t give up his appetite nor his passion, so he demanded his chamberlain, don Gennaro Spadaccini, to find an appropriate solution. Spadaccini soon came up with the brilliantly simple idea to adapt the existing fork, adding two extra prongs and shortening all of them, thus making the tool suitable to roll pasta. In 1770, the four-toothed fork as we know it was born.

The customary royal intermarriage arrangements of the time led to the union of Ferdinando of Bourbon with Maria Carolina of Austria in 1768.
The queen was very close to her youngest sister, Marie Antoinette of France. You might think this is just a cheesy tabloid-worthy detail, until you consider the consequences. Maria Carolina looked up to the French court for what concerned fashion, art, books and …cuisine.
It is due to the queen if the Neapolitans met French haute cuisine and integrated it in some of their most traditional recipes long before it became popular elsewhere.
Over the XVIII and XIX century, aristocratic families had in-house chefs called monzú. In times of French vogues, cooks held the title of monsieur, but in the realm of the Neapolitan language, it was only natural that the world would end up being neapolitanised as monzú. The same treatment was given to many French or French-inspired dishes, and to this date the local cuisine resounds of sartù, gattò (from the French gateau), ragù (from ragout), crocchè (from croquette),  babbá, and so on.
The French cuisine was skilfully adapted to the Neapolitan taste, losing some butter for olive oil, gaining tomato sauce here and there, but keeping the same level of baroque finesse.

The Royal Palace of Caserta and Carditello.

Carlos III was the grand-grandson of Louis XIV, the Sun King, and he was probably influenced by his grandness, when – in 1753 – he hired Luigi Vanvitelli to build one of the most lavish residences in the world, the Royal Palace of Caserta.
Born Lodewijk van Wittel and son to a Dutch landscape painter, Vanvitelli was one of the most prominent architects and engineers of his time. More than being appointed to designing a monumental palace featuring the most luxurious novelties – including a mechanical elevator! – he was entrusted with an even tougher challenge: turning the rather barren area of Caserta, in the Neapolitan inland, into a lush, generous landscape, shaped by impressive waterworks.

Vanvitelli’s drawing for the Carolino aqueduct, 1756.

Little Vanvitelli knew, the aqueduct he built to supply the beautiful fountains in the royal park of Caserta, were to play an important role in bringing buffalo mozzarella to our contemporary tables.
What was certainly a display of royal exuberance eventually benefited the development of the area around Caserta. The spring water conducted from Monte Taburno (over 40 km away) was not only used for ornamental purposes, but it supplied fish ponds and hatcheries, agricultural fields and eventually buffalo farms, that typically require large amounts of water.

It was especially under Ferdinando IV that large scale farming took off in the area. The king turned the Royal Estate of Carditello (13 km of the Royal Palace of Caserta), once his father’s hunting lodge, into a state of the art centre for agronomic and zootechnical research, particularly focused on wheat, horses and bovines.
Carditello became home to a buffalo barn and an important cheese factory where mozzarella – common since ancient times in an aged, sometimes smoked version – was perfected and produced in a larger scale the that allowed for a broader market.

In this video, As Soup As Possible met Mauro Felicori, a cultural manager from Bologna, appointed direction of the Royal Palace of Caserta in December 2015, and Vincenzo Mazzarella, chief of Educational Services to talk about the charms and treats of Caserta.

The Royal Palace of Caserta is the largest royal residence in the world by volume (>2 million cubical metres). Its whole monumental complex is part of the WHC-UNESCO world heritage list, together with Vanvitelli’s park and aqueduct, and with the near San Leucio (yet another royal residence).
The English garden at the Royal Palace of Caserta is one of the oldest in Europe and includes an area inspired to Pompeii, the discovery of which took place under Carlos III, who personally started it archeological site in 1748.

The illustrator.
The “royal forks” cover of this post was created for As Soup As Possible by Irene Servillo.
Irene studied Visual Communication and Illustration in Edinburgh and Naples.  Scissors, glue and coloured paper contribute to her fresh, surreal and timeless style.
She is currently based in Naples. To see more of her work, visit her website.