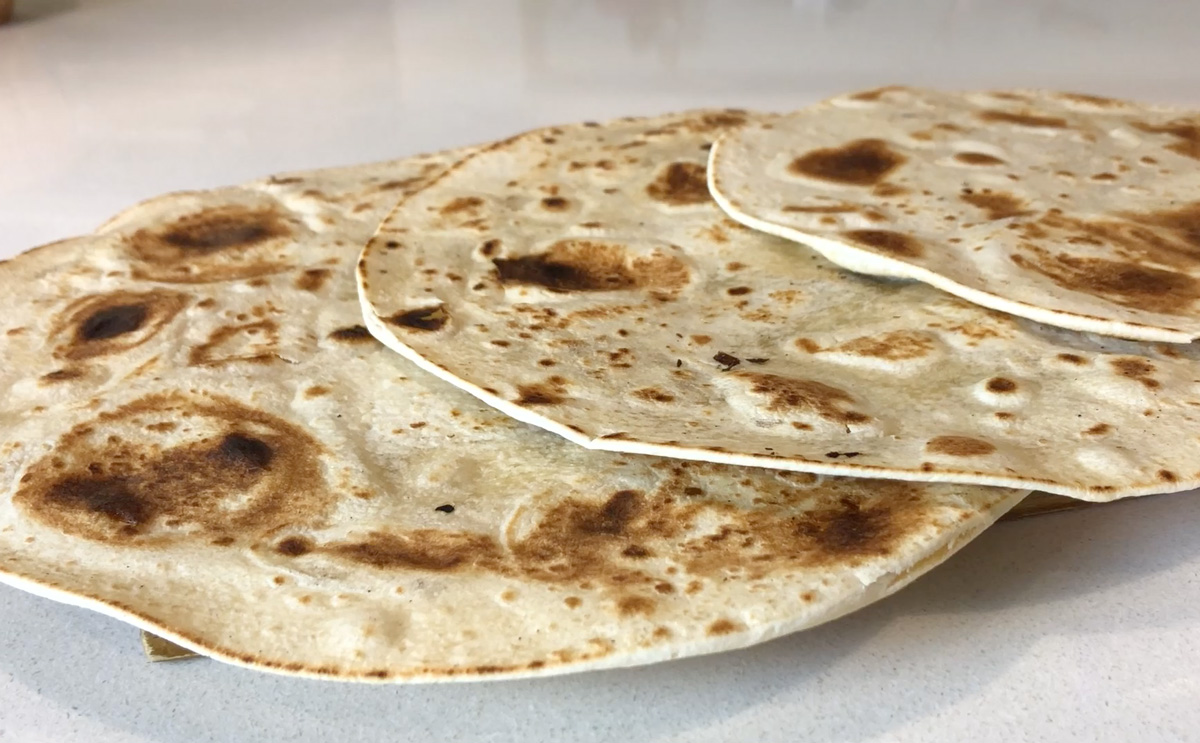 Of all the flatbreads around the world, there is one that in a certain region of Italy is synonym with holidays: piadina romagnola.
Flatbreads are a great example of what I like to call “food universals”: they are a common element to many culinary cultures and help us understand how even the most local, typical, identitarian foods are in fact clear expressions of what humans have in common.

Piadina is part of a huge list of unleavened bread types that includes staples like parathas, tortillas, arepas and many more.
This extremely simple recipe was born in Romagna, an area of central Italy on the Adriatic sea, where piadina and its sibling recipe crescione are extremely popular and sold as street food all year round.

The name reminds of the Italian world “piatto”, that means both flat and plate. As a matter of fact, just like pizza, this flat round dish of dough was originally a functional edible substitute for a plate that could be topped with different ingredients.

A piadina seller in the Sixties.

For centuries, piadina was a staple peasant food. It was considered a poor man’s surrogate of bread in times when flours suitable for bread-making were scarce or a convenient fallback when people would run out of bread in between bakes.
Starting a wood-fired oven costs hard work, time and wood, and in old times families would only have one bake per week, to make the most out of it and have a batch of baked goods available for a few days.
Making a piadina is easier and convenient, instead. Home cooks would typically bake their piadine on a stone pan called testo and garnish them with whatever was at hand.

In the first decades of the XX century, and particularly after World War II, the coastal area of Romagna became the center of Italian mass tourism and piadina made lived a second life of glory in the new role of street food.
Piadina kiosks started to pop up, selling hot piadine topped with local ingredients like cured meats, soft cheese, and vegetables. Over time they started to sport striped tents that became distinctive and came to signal the presence of this simple delicacy from a distance.

The locals still make piadina at home and mostly bake it on one of the modern versions of testo made of cast iron or fire-stone, but even for this extremely simple recipe, there are as many renditions as households.
When Piadina Romagnola earned the Protected Geographical Indication in 2014, the committee that proposed its registration to distinguish it from industrial products with the same name had to narrow down this variety to two main versions.
These two main types are the inland version, with a diameter of about 20cm and a thickness of 4 to 10 mm, and the coastal version, with a diameter between 21 and 30 cm and as thin as 3 mm.

Disma and Valentina from Piadina Bar

Consistently with my premise about food universals, the recipe I’m presenting to you this time is “the Amsterdam version” of piadina romagnola.
I collected it in this video interview with Valentina Vaienti, one of the founders of Piadina Bar, in Amsterdam.
Together with a group of friends, Valentina put into action a 1994 song by Samuele Bersani that joked about exporting Piadina Romagnola: they opened the only piadina-themed restaurant in Amsterdam in 2015.

Here is a recipe you can easily replicate at home, wherever your home is.

Knead the ingredients, together, incorporating the dry ones before adding the liquid part.

Let the dough sit for about 20 minutes.

Divide the dough in small round buns and roll them out in a 4mm flatbreads.

Bake them on a hot surface for 2 minutes per side.

Garnish with your favourite ingredients, fold and enjoy!