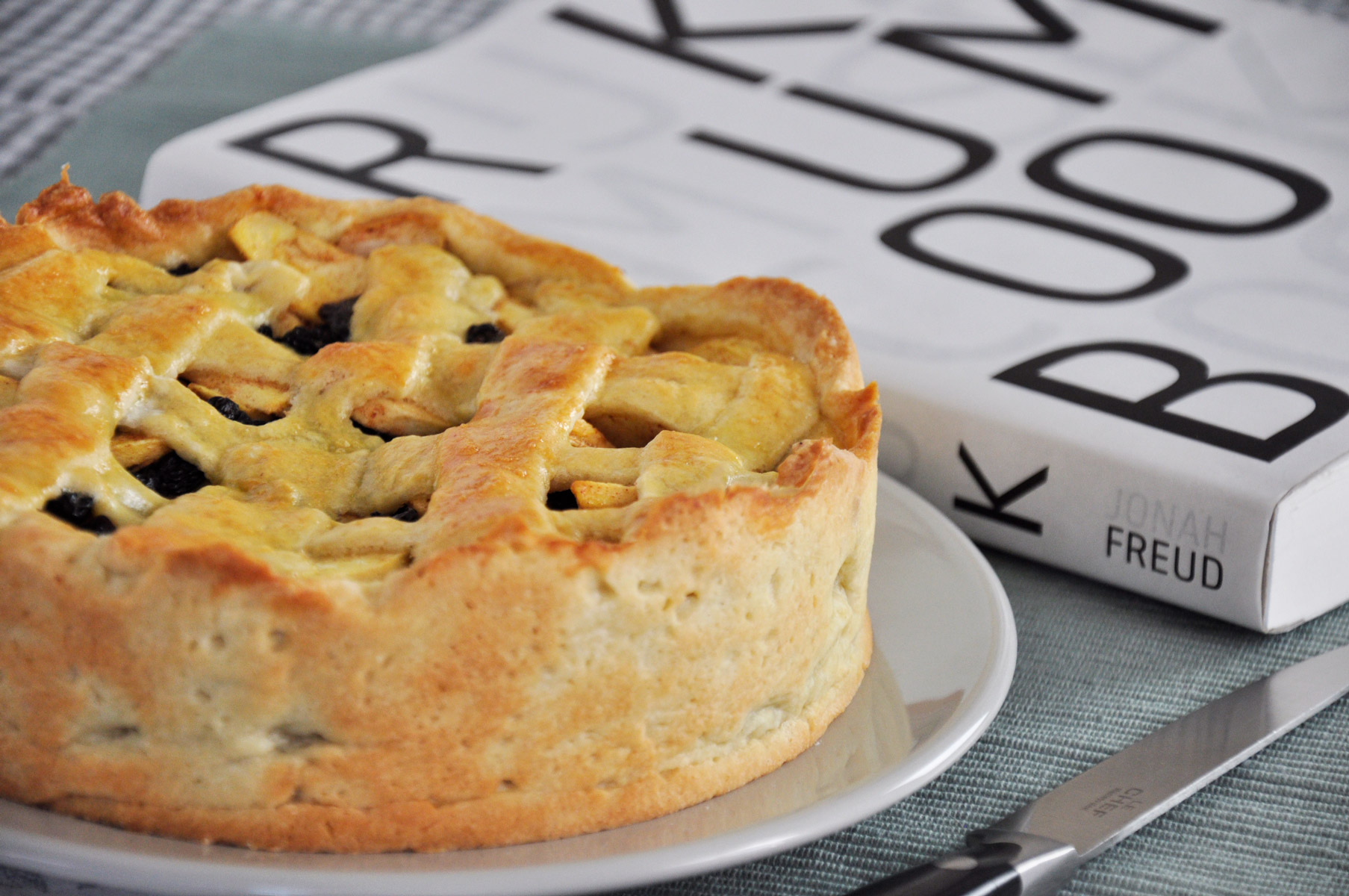 A warm slice of high apple pie – or, as the natives call it – appeltaart, is one of the first distinctively Dutch things I came to appreciate when I moved to Amsterdam, back in 2012. It’s also the easiest to love about the somewhat austere Dutch cuisine. I must confess I’ll always point guests visiting from abroad in the direction of my favourite appeltaart place, rather than sending them off to nearest herring stall.

De gustibus non est disputandum, but in my experience people are more likely to hold a fond memory of a fragrant wedge of apple pie, rather than of a whole raw fish topped with a handful of chopped onion. When it comes to giving advice about the one last thing to try before leaving Amsterdam, I go for the surest bet: apple pie!
The Dutch rendition of this beloved pastry is high, with a thick crunchy crust. Its pretty lattice-top lets out a sweet scent of cinnamon and allows a glimpse of the filling: sliced apples, mixed with an un apologetic amount of raisins.

The appeltaart appears in the first Dutch cookbook, Een notabel boecxken van cokeryen, printed in Brussels in 1514, so it’s fair to say it belongs to the history of this corner of Europe.

We all know what a significant part of history, identity and culture food can be. I’m very curious about the food you can find in art as well.
Since the first time I visited the Rijksmuseum in Amsterdam, back in 2003, one of the themes that struck me the most was the amount and quality of still lives of food and set dining tables in their collection.

Every time I visit, I linger in front of still-life paintings of the Golden Age to observe fruit and vegetables, cutlery and tableware and observe the differences with today’s food habits. When I found out that the museum had published its own cookbook, a few months back, I felt like they had been reading my mind.

The book features 130 recipes based on 50 ingredients that belong to the Dutch tradition, and 900 illustration from the Rijsmuseum collection.

It gets even more beautifully Dutch: the design of the volume was created by Irma Boom, a renowned Dutch book designer.
She decided to print the Rijksmuseum Cookbook on pages that resemble baking paper and – I must tell you – feel and sound great when you turn them.

The recipes – featuring traditional dishes as well as some contemporary renditions – were contributed by fifty of the most prominent Dutch chefs and pastry masters (Robert Kranenborg, Jonnie Boer, Benny Blisto and RIJKS® chef Joris Bijdendijk, just to name a few).

The director of this culinary orchestra is Jonah Freud, cookbook author and owner of De Kookboekhandel, a bookshop entirely dedicated to cookbooks.
She is more than a food writer: she has a lifelong love story with food writing. Her first fascination with recipe books traces back to her childhood, and to this day she reads them in bed, on holiday, at work… She wrote some, and even hosts a radio show segment dedicated to the topic on a national radio channel.
Some call her “the Dutch queen of cookbooks”. I’m not familiar with monarchy, so I prefer to call her a real cookbook nerd, and if such a word as “cookbookworm” existed, she would definitely deserve the title.

Always looking for ways to connect to my hosting country through food, I was enthusiastic when Jonah Freud accepted my invitation to be my guest-cook for As Soup As Possible Kitchen Stories; even more so, when she agreed to present a classic Dutch apple pie.
The original recipe was contributed to the Rijksmuseum Cookbook by Dutch pastry master and TV chef Rudolph van Veen.

In case you can’t get ahold of custard powder, a mix of corn or potato starch and vanilla sugar will do the job.

Rather than as an after-dinner dessert, the Dutch serve generous wedges of apple pie over coffee break, with a cup of gewone koffie (regular).
If you really want to pamper your guests, serve it when it’s still slightly warm and suggest to have it met slagroom, that is with a dollop of whipped cream on the side.
The simplicity of this nutritious pastry will make you want to snuggle in a canal-side bruin café on a rainy day. Just try an see.

Jonah Freud is the owner of De Kookboekhandel, a bookshop specialising in food literature, cookbooks and gastronomy, now in its 40th year of business.
She first worked in the shop at the age of 16, as a volunteer, and has now been the owner for 28 years.
Freud is a real Amsterdammer, lives in a houseboat, owns a beautiful grey cat and has raised two children with the same love for cookbooks.
She has cookbooks everywhere, including on her bedside table and in her hand luggage when she travels.
Surprisingly enough, she barely ever follows a recipe by the book.