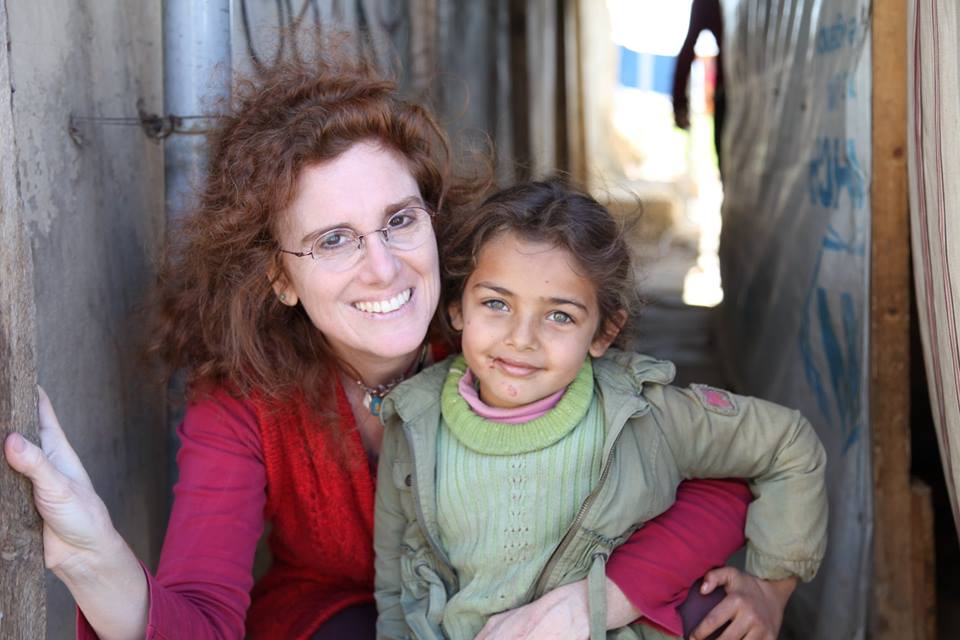 Watch the book releases in September: something warm and tasty is cooking for you and some other millions people.

That food connects us one another and to our environment is a very basic concept we first learn as school kids, with that of food chain.
Unfortunately we tend to forget that we live in a network of feeding relationships with the world, until we bump into a reminder.

In the winter of 2013 Barbara Massaad, a photographer, TV host and cookbook author, was in her home in Beirut. Despite the heater being on, she felt cold. This made her think of somebody else who might be suffering the cold at that very moment, not far from her place: Syrian refugees.

Since 2011, an increasing number of people fleeing the civil war in Syria have been gathering in refugee camps and informal settlements in Turkey, Lebanon, Jordan and Iraq.
Of about 4 million refugees, 1,172,753 are displaced in Libanon, according to the UN Refugee Agency . The number underestimates the actual size of the situation, as the Government of Lebanon suspended registrations last May.

In the winter of 2013 Massaad grew interested in the actual living conditions of these unfortunate people and she started visiting a settlement forty-five minutes drive from her home to take portraits of the refugees. She felt she needed to help with what she could, and she is not only a professional photographer. Since a very young age Massaad helped her father in the family-run Lebanese restaurant and her life revolves a lot around food: she is a member of the Slow Food movement and the co-founder of Slow Food Beirut, the author of three cookbooks and the host of food-related TV shows.
She soon began to fill the trunk of her car with grocery to go cook with the Syrian people she had been photographing, helping 50 families to find some normalcy and relief in food.
But why not do more?

This story has its turning point in a conversation between Massaad and Michel S. Moushabeck, a writer, editor, publisher and musician. Moushabeck is also the founder of Interlink Publishing, an independent publishing house specializing in world travel, current affairs, history, and ethnic cooking, established in 1987 with the mission to promote “dialogue, cross-cultural learning and a greater understanding between the West people and the rest of the world”.

Moushabeck had the intuition to involve renowned international chefs in Massaad’s efforts to collect recipes in a fundraiser cookbook.
The book is finally coming out in September 2015, with the title “Soup for Syria. Recipes to Celebrate Our Shared Humanity”.
The 208 pages illustrated cookbook features Massaad’s photographs and recipes by over 80 contributors, including international celebrity chefs like Anthony Bourdain, Yotam Ottolenghi, Claudia Roden, Greg Malouf, Ana Sortun, Sami Tamimi, and many others.

I love the way the subtitle puts together the concepts of celebration, food, sharing and humanity. I believe the world deserves more humanity than humanitarism. If we were more true to the former, there would be no need for the latter.
Food – especially the basic foods that represent our shared human roots, like bread or soup – speaks directly to people’s core, thus smoothing communication out and making sharing easier.

What I love even more is that Massad’s book is entirely dedicated to soup recipes! This resonates with my theory of soup being a universal messenger of warmth and comfort.
To prove my point even more, I’ll give you an extra demonstration of how great a connector soup is. As soon as I found out about the book, I reached out to Barbara, told her about As Soup As Possible, and asked her a few questions about her own soup project. She replied almost immediately, kindly accepting my invitation. Soup really does bring people together!

Here is what I asked Barbara Massaad.

Do you have a soup story to share? What is the soup recipe that best represents home in your memory?

Soup has always been special to me. When I was a little girl I would say to my dad, “The soup warms my heart”. The best soup recipe for me is the one where you just dump in a huge casserole a whole bunch of vegies and hope for the best. Of course if you have homemade chicken stock, it’s even better. I love to put fresh herbs also… I remember when I had my first job, I would give out my soup recipes to friends in the office. I worked in marketing during that period but food was always special.

Food is a lingua franca that overcomes borders, political and religious divisions.

Your project gets straight to the point: there are people in need who are lacking the essentials;

feeling responsible for them, feeling the urge to feed the hunger is a basic human instinct. How did contributors respond to your call?

Actually it was very easy to convince contributors to donate recipes. We had so many actually that we had to choose the best of… The message was simple, to the point, very basic… The recipe was a small token to progress towards humanitarian aid.

Food and cooking habits are practical sides of our lives that often define us and have as much to do with our feelings and identity than they have with downright nutrition. The Syrian refugees your project is aimed at have had no choice but leave everything behind, including their kitchens and their own food.
How frequent are these topics in your conversations with them?

The topic of food was very  frequent and what I always noticed is that no matter how miserable their condition, it would always bring laughter and joy to them.

Your dream was at first to use the proceeds from the book to build communal kitchen, allowing refugees to cook as they used to do in their homes. I think it’s a great idea and it would provide an opportunity to empower community and individuals while responding to their food emergency. Do you think this will be possible?

At this point building kitchens is impossible because the Lebanese government will not allow it. Basically the funds will go to FEED the refugees. I think now we have to look at the basics and feeding people has become a priority. Foodstuff will be purchased in bulk. The books sold in Lebanon will be distributed to help medical cases which cannot be covered 100% by the UN relief program. Because I have met so many families, I know what they need and will help pay hospital fees with the funds.

“Soup for Syria” will be published simultaneously in the US (Interlink Books) and in the UK (Pavilion), and is currently available for preorder. The proceeds from the sales will be donated to the UN refugee agency UNHCR, which will use the funds for food relief endeavours in favour of Syrian refugees.
Moushabeck is looking for more co-publishers in Europe.
Launching events of the book in US and UK, as well as an event in Lebanon, with actual soup involved are in Barbara’s calendar.

I asked her whether a presentation in Amsterdam was in sight.

I think that would be excellent, but I need to have a contact there and organize it accordingly.

I hope this will come true and that more and more publishers, readers and soup lovers will gather around this compassionate and valuable project and the people of Syria.

“When I visited the Syrian refugees in Lebanon, I said to them: ‘Had I been a barber, I would have cut your hair for free. Because I am a cookbook writer and photographer, I am doing what I can do to help through my work.” —Barbara Abdeni Massaad

“Soup is the ultimate comfort food: nurturing, sustaining and all good things. One recipe is a drop in the ocean but, if awareness of the plight of the Syrian refugees is raised with each batch made and shared then that is a force for good. As well as being a delicious meal in and of itself.”
—Yotam Ottolenghi and Sami Tamimi “In Farsi, the word for chef is ash-paz—someone who is capable of making ash, or herb soup. The ash dishes of Iran are held very dearly, and the act of making them is often regarded as an act of love or dedication. I would like to think that as you make this recipe you will remember those who are in exile from Syria, who have no kitchen or soup pot or indeed anyone for whom or with whom to make soup.”
—Sally Butcher“Whether we are in times of crisis or times of peace, gathering family and friends together around the table and sharing food is one of the most powerful and life-affirming acts we can do. And there is nothing more comforting and nourishing than a bowl of warm soup.”
—Alice Waters

[Book cover and quotes are sourced from interlinkbooks.com]