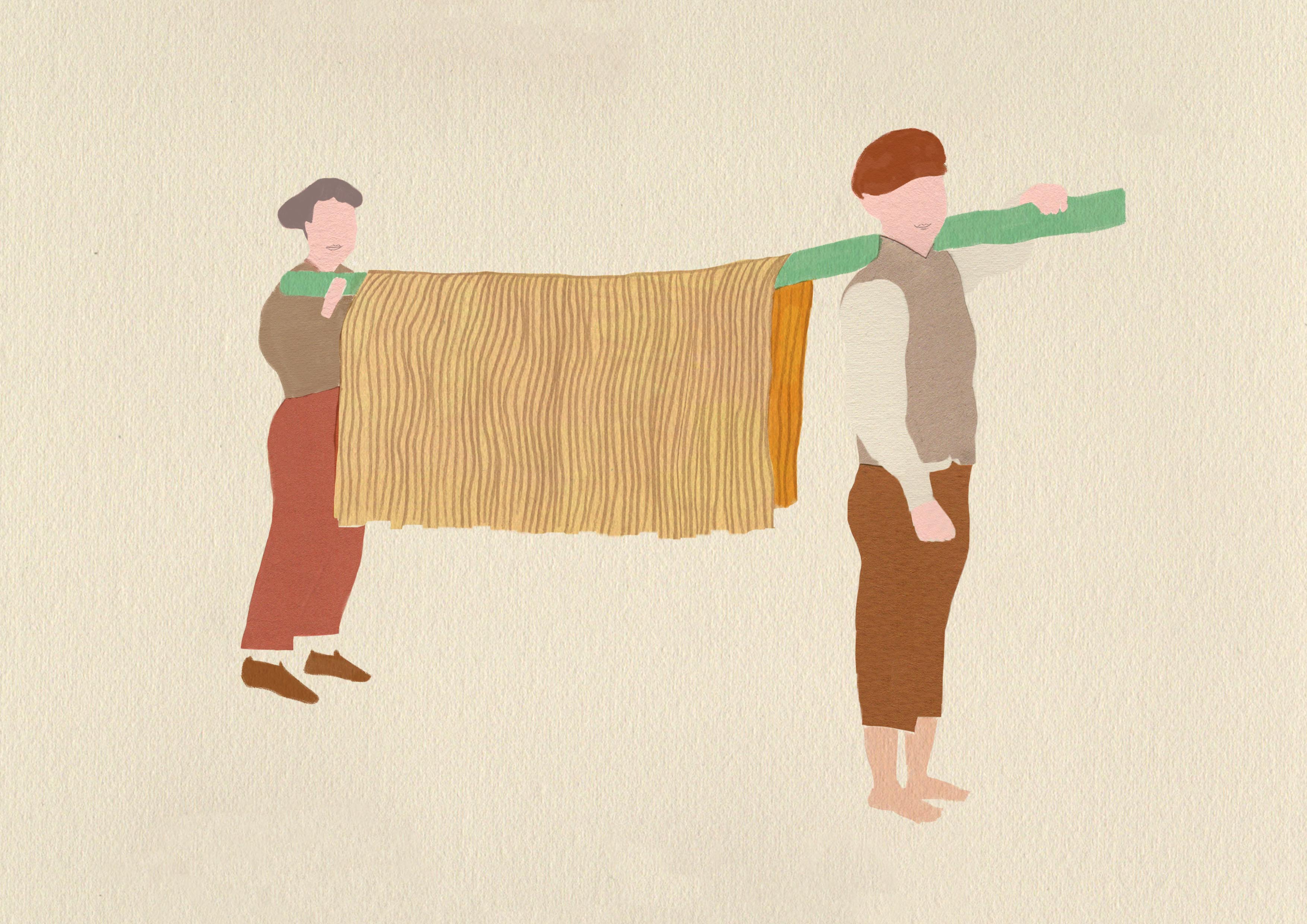 Making pasta is easier said than done. Ask the French website lambasted for defiling the recipe of  pasta alla carbonara in a recent video that ignited international outrage before being removed by popular demand. Don’t mess with the sacred things in life!
There are places where this typical Italian food is taken very seriously.  As Soup As Possible travelled to the Italian town of Gragnano, allegedly the capital city of pasta, to see how it’s made.

How it all began. Perhaps.

The term pasta may refer to different preparations, either fresh or dry, traditionally based on wheat flour, in some cases mixed with egg (pasta all’uovo) or other ingredients.
However, it generally indicates durum wheat dry pasta, a staple in Italian cuisine.

Food historians have since long debunked the myth of Marco Polo bringing pasta to Italy from his travels to China. This picturesque yet unfounded explanation of the “invention” of pasta was in fact forged in 1920 in the United States by an inventive editor of the Macaroni Journal, magazine of the Macaroni National Manufacturer Association.
At the time of Polo’s return, in 1296, this food was already traded in the Mediterranean, not to mention that, according to many scholars, earlier versions of dry pasta were even used by the Etruscans, an ancient civilisation of the peninsula.

Most likely, there was never such a thing as “the invention of pasta”, but rather an evolution of similar preparations based on semolina in civilisations where wheat and mills were available and drying a paste derived by grains was a convenient way to store food.

Gragnano, a place made for pasta.

What we can be positive about is that the proto-industrial manufacturing of pasta began in the region of Naples, specifically in the hillside towns of Gragnano and Torre Annunziata.
The so-called “white art” of pasta making developed quite early in these areas and was anticipated by the development of a flourishing milling industry during the Middle-ages.
Gragnano’s geographic position on the slopes of Monti Lattari (Lattari Mountains), backbone of the Sorrentine peninsula, and overlooking the Gulf of Naples, made it the perfect place for this kind of manufacture. The generous abundance of water that had earlier powered the milling activities of the area provided for what is said to be one of the secrets of Gragnano’s “white gold”: spring water poor in calcium, sourced locally.

The manufacture started in the XVI century and definitely saw its golden age in the XIX.

Via Roma was designed to capture winds.

In 1859 the small town counted 81 presses to make pasta, while about 75% of the population was employed in an industry that relied widely on manpower and managed to produce high volumes for that time, despite a certain resistance to full mechanisation.

Until the beginning of the XIX century, Gragnano pasta-makers dried their product outdoors, in the mediterranean sun, helped by a fortunate combination of warm winds coming in from the Gulf of Naples, and colder winds from the mountainside.
This distinctive geographic condition made the fortune of Gragnano’s pasta: thanks to the gentle drying method and the alternation of different temperatures, the gluten contained in the semolina was preserved all through the process, giving pasta di Gragnano its typical resistance to overcooking and pleasantly chewy consistency that gives the famous “al dente” bite.
The main street of Gragnano, via Roma, was designed and built as a gigantic natural drying rack: exposed to sunlight and oriented to capture the wind.
In 1885 a railway was built to connect Gragnano to Napoli and allow the transportation of pasta.
The city, however, proved almost immune to the strains of the industrial revolution and its manufacture stayed mainly craft-driven despite the massive industrialisation of pasta factories in the North of the country (unified in the Kingdom of Italy in 1861).

The XX century, however, came to demand some change: the drying of pasta in the middle of the street, exposed to dust, insects and weather changes, was no longer suited for the increasing hygienic standards of the new century.
How to preserve the peculiarity of a natural product which was embedded in the local climate and geography and stay competitive?
An engineer from Torre Annunziata, Mr Cirillo, came to the rescue and invented a drying cell with a fan made of canes and low heaters which artificially reproduced the conditions of outdoor pasta drying and reduced the drying time from about ten to three days.

The “City of Pasta” today.

Gragnano identifies with its white art to the point that the city hall has a fistful of pasta and ears of wheat in its official crest.
In 2013

the pasta made in Gragnano by the code of its traditional craftsmanship earned the prestigious acknowledgment of IGP status (PGI – protected geographic indication) by the European Union.
The tradition is guarded by a special consortium of historical companies, in charge of protecting the local brand and guaranteeing the product quality.
Rough, firm after cooking, unique in shape and color, pasta di Gragnano can only be made within the territory of Gragnano, following specific technical requirements: only durum wheat semolina, water from local springs, extrusion through bronze moulds, drying temperature strictly between 40° and 80° C (104 to 176° F).
Over the years and despite the challenging of huge industrial competitors pumping high volumes of product into the market by heavy drying procedures and fast processing, Gragnano’s white art stayed substantially the same.
During the ’80s and ’90s, when big industrial brands from the North of the county started winning more and more shares of the national and international pasta market,  the local manufacturers were clever enough to preserve their craft-oriented approach and innovate without giving in to the temptation of choosing quantity over quality. Instead of switching to high heat drying (which would have cut the drying time from days to a few hours), they aimed at standing out as an example of excellence, a niche product for demanding consumers and chefs. They fought back on the battling field of the dining table, investing in the revival of forgotten pasta shapes, mainly the big ones like paccheri and conchiglioni, which gradually became cult shapes for special culinary creations.

The uncompromising stubbornness of Gragnano’s pasta makers in sticking with the teachings of their ancestors has allowed the tradition of this delicious pasta to survive till our days, gaining worldwide recognition for its superior quality.

Almost 15% of the pasta exported from Italy each year is made in Gragnano.
The city economy is still mainly based on its historical product.

ASAP and the pasta factory.

As Soup As Possible visited the factory of one of the members of the consortium in charge of Gragnano’s IGP.
Pastai Gragnanesi is a coop of twenty working members – most of which children of workers of Gragnano’s white art – who teamed up to buy an old factory in 1980.
Unlike industrial plants, which have a typical horizontal structure, Pastai Gragnanesi’s production chain and that of other traditional plants develop vertically and so does the workflow.
This layout reflects the traditional organisation of production, which is still based on the same roles: kneader, cutter, dryer and packager.
In 2008 the premises of Pastai Gragnanesi were heavily damaged by a fire, which destroyed most of the machinery, including pieces of historical value.
The coop members were left without a job, but they still have the gene of perseverance inherited from their fathers on their side. They had to work hard to re-fund their enterprise and reopened years later, after an extensive renovation that turned their factory into an innovative plant, combining tradition, hygiene and efficiency.
Today they make 10t of pasta a day (against the 500-100t poured out by the main industrial brand based in Gragnano, which isn’t IGP/GPI certified “pasta di Gragnano”).

We interviewed the director of Pastai Gragnanesi, Giovanni D’Avino, and couldn’t help nosing around racks of maccheroni, conchiglioni, fusilli bucati, penne, peeping in Cirillo drying chambers and watching the swift moves of pasta workers.
Luckily enough, this was no Roald Dahl book and we survived the visit, only with a coating of impalpable semolina dust and invincible pasta cravings.

[Click on “CC” to activate EN or IT subtitles]

The cover picture of this article was created for As Soup As Possible by Italian illustrator Irene Servillo.
Irene has studied Visual Communication and Illustration in Edinburgh and Naples. She loves creating her works with simple ingredients: scissors, glue and coloured paper; the condiment is a surreal and timeless style typical of childhood.
Irene Servillo lives and works in Napoli. To see more of her work, visit her website www.ireneservillo.com .