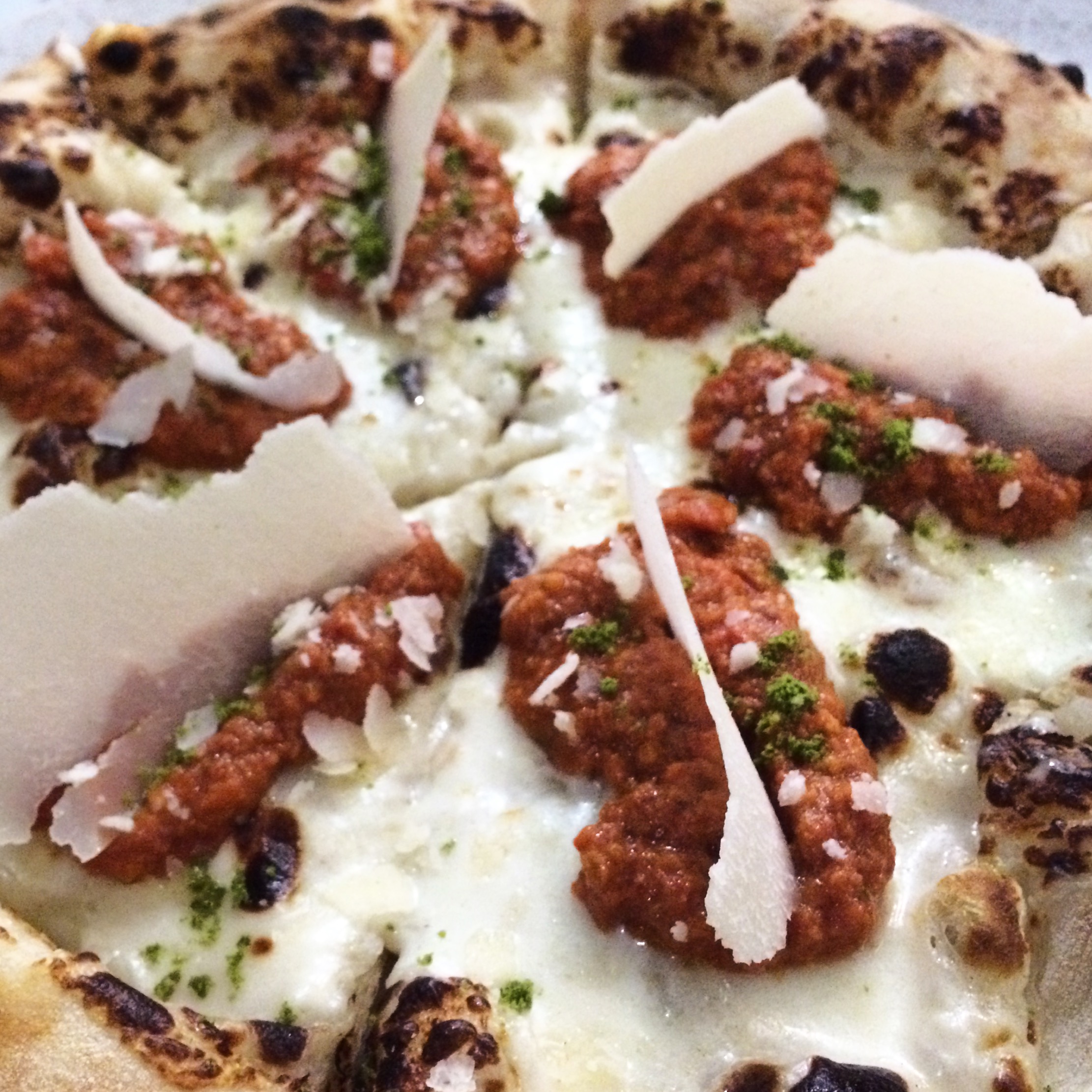 To get to Franco Pepe, you need to leave the beaten path of the usual pizza pilgrimages. His Pepe In Grani – recently declared the best pizzeria in Italy and in the world – waits for you at the end of a treasure hunt throughout the beautiful province of Caserta.

We’re in the Alto Casertano area – precisely, in Caiazzo, a tiny hilltop town one hour North of Naples, the official capital of pizza.
You’ll love these beautiful landscapes, rich in history, nature and agricultural knowledge, and you will know what they taste like, when you leave your dining table.

Over the past decade, Italy has seen the rise of a new generation of pizza chefs revamping and modernizing the image of pizza. Once a poor man’s meal, pizza is becoming, for better or worse, the new frontier of gastronomy.
Napoli is the centre of this movement, but hidden in the narrow alleys, behind the stone walls, Caiazzo has its own pizza champion, and it’s no longer a secret.

Franco Pepe, now a world-class name in the field of pizza, and widely credited as one of the best pizzaiolos on the planet, strikes you as a gentle man. He has a whole evening and hundreds of pizzas ahead of him, yet he greets us with a fresh smile and a friendly composure. You can tell he knows the ropes by his poised and welcoming attitude while his team start arriving for the beginning of their shift and kitchen and floor gradually come to life.
The quality of service and the production structure Franco Pepe has created are two of the key factors in the success of Pepe In Grani. I can hear the confidence in his team and the well-oiled machine he has set up in his calm voice as he tells us about the concept behind the project.

It takes a village to raise a pizza.

Real food is grounded in a network of relationships. Just like language, food draws its meaning from the ongoing connections with others.
What at first glance looks like a simple dish is often the end point of a complex production system, linking to history, a great deal of professional knowledge and personal stories.
With every genuine meal that’s cooked with awareness of its substance and whereabouts, food refuels its potential to multiply knowledge and memories, and cultivate bonds.

Every cook who values the importance of raw ingredients and the quality of their processes knows that cooking is never a solo effort.
Some take it even further and embody what Carlo Petrini calls co-producers. These are individuals who overcome the category of “consumers”. By supporting the production of what they cook and eat, they play an active role in the communities that food entails, aiming to a solid relationship with farmers and food makers.
Franco Pepe is definitely one of them. He takes his role in the local network that brings his pizza to his tables very seriously.

View from the roof terrace [Photo: Pepe In Grani]

The third generation of a family of bakers in Caiazzo, he started his very own Pepe In Grani in 2012. Since the early days, he established a close collaboration with farmers and producers of the Alto Casertano area, to promote local foods, traditional varieties, and artisanal know-how.
This wealth of gastronomic culture is served daily to his guests on his pizza.

More than a baker, Pepe is an ambassador of his area, a connector and a firm believer in the treasures of his territory.
He tells us about a project he’s very proud of: he joined efforts with agronomists, nutritional scientists and farmers to create a pizza made entirely from ingredients sourced within 5 km and selected among old varieties (like the forgotten wheat Autonomia).

The positive impact of Franco Pepe’s initiatives is reaching far beyond gastronomy. The success of his Pepe In Grani is becoming a driver for the local economy, a catalyst for culinary quality and an attraction for tourism in the area.
Pepe is well aware of this, and he proudly shows us the nicely renovated suites on the top floor of his restaurant. They represent the last complement of his idea of hospitality.
Guests who are interested in his research and pursuit of local excellence can visit some of his suppliers, spend the day exploring the many culinary treasures of Alto Casertano, and finish with a good night’s sleep next door to Pepe’s cherished pizza dough.

Franco Pepe’s pizza is unplugged and yet deeply connected with its territory.

That’s right: pizza dough has a room of its own, in the XVIII century building of Pepe In Grani.
The sobriety transpiring from Franco Pepe shines a whole new light when you see him in his sala impasti, the kneading room.
Although it must be continually busy, to keep up with a growing demand of pizza, this place can become a temple.

Those who are familiar with baking – especially with wild yeast – know very well that there’s no standard formula for the perfect dough.
When flour, water and yeast come to play, the final result is always affected by many intervening variables. It takes what I call dough whispering to tweak and master the ingredients (motion and time included) to achieve the result you’re aiming for.

The way to that mystical place that Italian bakers call punto di pasta (the “dough point” that marks the moment you have to stop kneading) can take you close to meditation.

Franco Pepe is possibly the best testimonial for my dough whispering creed: he elevated hand-kneading to a hallmark of his artisanal process.
Unlike most pizzaioli of his generation, he still kneads pizza dough by hand in wooden kneading-troughs (madie, in Italian).

He believes one of the most important skills a pizzaiolo should acquire is to master his dough with his senses. No electric appliance stands between the hands of a pizzaiolo and the matter of his craft, in Franco Pepe’s world. It’s pizza dough, unplugged.
Getting to the punto di pasta becomes a matter of perceiving consistencies, humidity, and temperatures, solely by using your skin, nose, and presence while kneading.

The ancient and essential gestures that bring the dough to life from the most simple ingredients are combined with a forward-looking taste in pizza toppings.
Franco Pepe’s menu allows the guest to explore a whole range of flavours, from the most classic and traditional ones, to those that earned Pepe broad recognition for his innovative pizzas.
His margherita sbagliata (margherita “done wrong”) and scarpetta (awarded the dish of the year 2017 prize at the culinary convention Identitá golose) are to die for.

No matter the topping you pick, you’ll be sure to discover top quality ingredients, and bring your senses on a journey through the authentic flavours of Alto Casertano.

[Click on CC to select English or Italian closed captions]